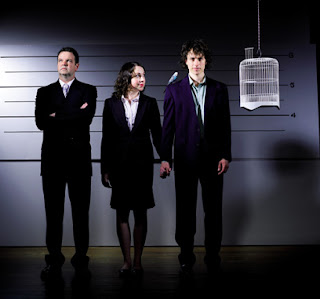 Based on a true story, The Spook by Melissa Reeves (one of the co-writers of Melbourne Workers’ Theatre’s classic play Who’s Afraid of the Working Class) is an ambitious, often delightful comedy-drama set in the world of espionage, but with a twist. Instead of your standard spy story based in , , or similar international locales, its story takes place in in 1965.

Martin (Luke Ryan) is a young fitter and turner recruited by ASIO at a football game and ordered to infiltrate and report on the activities of the branch of the Communist Party. Much of the resulting action is comedic, but Martin’s activities also lead to moments of real pathos, as he begins to question his role and the purpose of a double life which sees him alienated from old friends and betraying others.

The play’s tone is uneven, with occasionally awkward shifts between moments of broad farce (such as a scene in which Martin is instructed how to establish a new drop point for secret messages at the local cinema) and more serious scenes, including one that presents the stuffy tedium of a Communist Party meeting ruled over by a dry and dogmatic branch secretary (underplayed by character actor Kevin Harrington, of Seachange and The Dish fame). This problem becomes even more pronounced after the interval, when the comedic elements all but disappear, to be replaced by dramatic scenes spelling out the consequences of Martin’s actions, and alluding with a somewhat heavy hand to contemporary events and politics. Nonetheless these latter scenes also achieve a successful degree of emotional resonance, thanks in part to the quality of the actors on stage, who impress despite the strictures of characters which verge on caricatures.

Despite these flaws, and a theatre space in the Merlyn which seemed to slightly dwarf the production, The Spook is highly entertaining, and features excellent performances by the likes of Alison Bell (playing the dual role of Martin’s wife, and a put-upon communist librarian) Tony Nikolakopoulos, and especially Maria Theodrakis as the spirited Eli Tassekis, a passionate communist and ‘New Australian’ who takes Martin under her wing.

The set design by Anna Borghesi is clean, complex and striking, while director Tom Healey does an excellent job of keeping the action moving, timing the humour with aplomb and minimising Reeves occasional slips into didacticism.

The Spook runs until March 10 at Malthouse Theatre. Bookings on 9685 5111 or www.malthousetheatre.com.au.

Posted by richardwatts at 5:35 pm